Mexican cuisine is much more than just quesadillas, nachos with guacamole or enchiladas. In reality it is a very complex cuisine, full of nuances, flavors and colors to savour and discover.

There is something for all kinds of Mexican food fans throughout Madrid. It’s the easiest thing in the world to enjoy a good taco but we’re warning you, they are addictive and you will not be able to stop!

This restaurant has been a benchmark for lovers of authentic Mexican cuisine in Madrid for years. Its appearance is far from the type of informal Mexican restaurant that we are used to. It’s a super chic and modern place, with the option of sitting at formal tables or eating at the bar for a more lively atmosphere.

The dishes are from a renewed traditional Mexican cuisine based on local products and designed to share. On the menu there are authentic dishes but with a careful and contemporary touch, such as tacos de pastor, tinga de pollo or tacos de solomillo. Other delicacies that they have on their menu are the starters, among which we find for example their shrimp aguachile, the chicharrón de queso flauta and the tasty tosta de pulpo. You can accompany all this with a refreshing Mexican beer.

To enter Gracias Padre is to forget that we are in the heart of the Spanish capital. This Mexican restaurant has a very cool aesthetic where everything is inspired by different locations in Mexico and its culture. On its wall there is a red neon of a cross where the restaurant’s motto is framed, many plants and cacti that makes us think that we are on any beach in Tulum and not in Madrid. An environment that, with hardly any need for imagination, takes you to the Aztec country. It currently has five restaurants, four of them in Madrid and one in Pozuelo.

The menu is full of genuine Mexican flavors and divided into starters, many of them essential such as pico de gallo, melted cheese and beans, green chilaquiles with chicken, and tortilla chips with guacamole. There is also no lack of more potent proposals such as the huaraches of chicharrón and the melted cheese with minced chorizo ​​and tortilla chips. Without a doubt, the star of the menu are the quesadillas, especially the Governor Quesadilla and the tacos. And to add to the classic flavors such as tacos al pastor, cochinita pibil or carnitas tacos, they also have the crispy fish tacos Baja California, which they prepare with crunchy cod, pico de gallo, purple cabbage and sour cream.

A modern space that offers signature tacos in the Chamberí neighborhood. The concept of this restaurant is to serve authentic Mexican cuisine with traditional flavors but fused with Spanish products. Here you’ll find a tribute to Mexican gastronomy that consists of super tasty and well-prepared dishes.

On the menu you will find delicacies such as its costilla de ternera con barbacoa de chile morita, huevos rancheros with crispy fried blue corn under two fried eggs, or the house’s delicious aguachile. You cannot miss the governor tacos, with blue corn tortilla, grilled oaxaca cheese, ancho chili sauce, sautéed prawns, pickled onion and quicos powder; or their cochinita pibil taco with roasted leg of pork, marinated with achiote and orange juice. For dessert you can enjoy the flan de cajeta con cacahuete garrapiñado or the Tres Leches de chocolate. Don’t forget about their very interesting offer of cocktails such as La Paloma, which is made with tequila and grapefruit juice.

Here you’ll find haute cuisine with Mexican tradition that runs from Baja California to Quintana Roo in its extensive menu, achieving a perfect mix of innovation and tradition. This is one of the most fashionable Mexicans in Madrid and if you are looking for real Aztec food, this is your place.

They are so focused on being absolutely faithful to the original dishes that they work with native materials. The kitchen is also open, so you can see the chefs cooking in action and with options such as Árabe and Rosarito tacos, camarones Culichis and enchiladas Tabasqueñas you’ll not be disappointed. They also have an exquisite selection of Mexican desserts such as the tartaleta de Cajeta y Plátanos y el Milhojas de Mazapán y Chocolate.

Flavors of authentic Mexican gastronomy with a modern touch in a place with industrial aesthetics. It is the proposal of this restaurant that boasts dishes such as sopes de cochinita pibil and the taco gobernador. They are some of the stars of its 100% Mexican menu. But there is more: when night falls this place transforms into a club with a clandestine style where margaritas and micheladas mix with music.

They have different taco options, quite elaborate in style, among which the Suadero tacos, the carnitas de pato, the atún or the Gringa stand out. They also have the delicious cóctel Acapulco cocktail, camarones Rococó and 6 different but equally-appealing margaritas to choose from.

In Madrid there are countless places to enjoy good Mexican food. You can travel through Madrid’s take on Mexican gastronomy with these restaurants. Accompany your visit with our Retiro Park & Museums Segway Tour and you will have the best experience of Madrid. 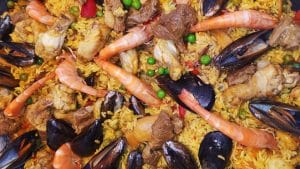 Where to eat Paella in Madrid 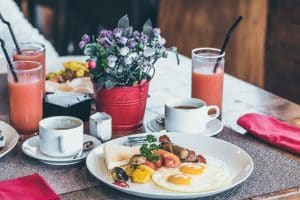