Valar Morghulis. All men must die. And they can’t die without seeing Spain. And if they have ever seen the TV show “Game of Thrones”, they already did. How? To recreate the universe of Westeros, the directors decide to shoot a lot of GoT scenes in natural locations in Spain. After all, Spain has plenty of medieval locations, natural parks and castles that look great in an epic fantasy show. The kind of places that the scenery crew almost don´t need to alter.

We bring you today the most representative Game of Thrones filming locations in Spain. Oh, and if you haven´t keep up with the 7th season of the show yet, be careful because…

The reign of Dorne is in the south of Westeros, and is described as sunny, hot and full of sand. That’s probably the reason the directors picked Sevilla to represent it. The Alcazar de Sevilla was chosen to be the water gardens, the palace of the prince Doran Martell. The Plaza de Toros de Osuna (The Osuna Bullfighting Arena) was the place where Daenerys Targaryen ride her dragon to escape from an ambush orchestrated by the “Sons of the harpy”. The Atarazanas de Sevilla were the Red Keep´s dungeons, while the Anfiteatro de Itálica was chosen to represent DragonPit, the place where the Targaryen Kings kept their dragons until they disappeared.

The Santa Florentina’s Castle, built in the 11th century is in the town of Canet de Mar, in Barcelona. It is also the fortress of the Tarly house, Horn Hill, to which Sam the Slayer returns in his way to the Citadel, trying to leave there his girlfriend Gilly and little baby Sam. The Castle is opened to tourist visitations and you can even celebrate your wedding there. How awesome is that?

Insight: The world famous Game of Thrones Exhibition is currently opening its doors in Barcelona for Game of Thrones fans from around the world, so if you just haven’t had enough Game of Thrones input yet you should check out this unique exposition with artifacts and background stories about the making of GoT.

In Cáceres they know it as the Plaza de Santa María. In the Game of Thrones universe, it´s King’s Landing downtown. During season 7, when Euron Greyjoy enters the capital of Westeros showing off his war prisoners, Ellaria and Tyene Sand, we can see several Cáceres locations on the screen. The Ironborn king and his entourage walk through the Cuesta de la Compañía from where we can see the Palacio de la Diputación, Golfines de Abajo and the Concatedral. Plus, the great battle between the Lannister troops and the Dothraki Horde in the Tyrell territory was filmed in an area called Barrueco de Arriba. Since Cáceres was the chosen location to represent the Tyrell country, the capture of Highgarden was shot in the Castillo de Trujillo.

The Dothraki territory, located in the continent called Essos, is known by everybody as the sea of grass. It’s the area where the nomad Dothraki hordes fight against each other, slaughter the weaker tribes and steal statues and take them to Vaes Dothrak, the city of horses. All these scenes were shot in Navarra, in a natural area called Las Bárdenas, thanks to its natural conditions and the tax deductions the Navarra government offer to the filmmakers.

The Basque Country has some of the most beautiful and spectacular natural views in the whole country, and the GOT directors decided to take advantage of it. They created the Dragonstone fortress in the monastery of San Juan de Gaztelugatxe, an island connected to the land with a stone ladder. The Bermeo beach and the cliffs of Zumaia are the spots where Jon Snow and Daenerys Targaryen negotiate their truce (and fall in love).

As we said before, Andalucía is a region in the south of Spain that totally looks like the reign of Dorne, at the south of Westeros. Another Andalusian region, called Almodóvar and the closest city, Córdoba, are the urban stage chosen to represent the free city of Volantis. The Almodóvar Castle and Córdoba´s Roman Bridge were the chosen locations. This famous Essos city is the place of birth of the red god, also known as R’hllor, which during different episode has shown its powers, like creating fire, giving visions to his followers and even resuscitating the deceased. The red priests have free range and a lot of power in this important spot.

What happened to Lyanna, Ned Stark’s sister, after being kidnapped by the Targaryen prince Rhaegar? If you want to know it, you will have to watch the show (or read the books). But, if you want to know the truth, you must go to the Tower of Joy, located on the Dorne desert. The location in real life? Sierra de Caldereros, Guadalajara, Spain. A natural desertic space, plain, with little mountains and the impressing Castillo de Zafra, a medieval fortress planted in the top of a rocky hill in front of deep cliffs.

El Paraje del Chorrillo was the Almería area chosen to represent the dusty and rough settings of Vaes Dothrak, the only Dothraki town in the world. The place where the Khaals go to enjoy their booty and to leave the deceased Kahl´s wives. When Jorah and Daario walk their streets, looking for Daenerys, they are walking scenarios set in La Rambla del Búho, in front of Sierra Alhamilla.

In the 6th season of the show, the Catalonian city of Girona appears no more and no less than in 8 of the 10 episodes, adding a total of 30 minutes of the show. Girona is both Westeros and Essos, and you can see it if you visit it and walk through its medieval streets. The Bisbe Josep Cartañà Street? The Braavos street where a blinded Arya Stark begs for money. The Plaça dels Jurat? The square where the Purple Wedding theatre play takes place. The Great Sept of Baelor, blown up by Cersei Lannister? The Girona Cathedral. As you can see, if you are planning a Game of Thrones Road trip, you are going to spend a lot of time in Girona.

When the slaves of Meereen rebel against their masters, struggling to get free, they really are citizens of the Spanish city of Peñíscola, acting in front of its famous Castle. This southeast Spanish City is the stage chosen to represent the city of Mereen, where Daenerys Targaryen chooses to set her residence. Another spot to visit in the south if you want to go full “Game of Thrones”.

Best Christmas Markets in Madrid for 2021

7 unique things to do in Madrid like a local 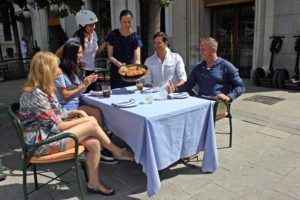