The Almudena Cathedral in Madrid

The Almudena Cathedral in Madrid: What You Should Know

To know Madrid is to discover its streets, its culture, its gastronomy and, also, the most emblematic buildings in the city. The Almudena Cathedral in Madrid is a temple that you can visit during your trip to the Spanish capital; we are going to give you a small preview so that later, you can see it and enjoy it with your own eyes.

To appreciate all its beauty, we recommend you visit its interior. You will enter magical places such as the Crypt of the Almudena Cathedral.

Besides, you have the opportunity to learn about the history and art of this beautiful place, which was the first to be completed during the construction of the temple. In fact, in 1911 it was already open to worship.

The crypt is neo-Romanesque with Byzantine influences. You will be amazed by its more than 500 columns, 50 of them monolithic and none equal to another; it’s all impressive for their size and the stone and beauty of their capitals.

As for the Cathedral of Our Lady the Real de la Almudena, its origins date from the end of 1868, at which time the Congregation of Slaves of the Virgin of the Almudena asked permission to the Archbishop of Toledo to build another church dedicated to the Virgin. Mrs. Mª de las Mercedes, the wife of Alfonso XII, supported this proposal.

It was ten years later when Francisco de Cubas (who became Marquis of Cubas later) was commissioned to elaborate the project of construction of a church. The first stone was placed on April 4, 1883, by Alfonso XII.

This church became a cathedral when Madrid was named diocese by Pope Leo XIII in 1884. The initial idea was modified, so this church was transformed into a temple with a much more ambitious project regarding its architecture and dimensions.

The different stages of the works in the Almudena Cathedral

The works have gone through different phases from the beginning. In 1944 the general director of Fine Arts, Marqués de Lozoya, called a national contest to give a new architectural vision to the cathedral.

The winning architects, Fernando Chueca Goitia and Carlos Sidro, modified the original idea to adapt the building to the environment; among other changes, they lowered the height of the temple to make the set with the Royal Palace more harmonious: it went from 32 to 25.8 meters. With this project, they won the National Prize of Architecture of 1944, and the result is the current Almudena Cathedral, a symbol for the people of Madrid.

As a curiosity, we will tell you that all cathedrals are traditionally oriented towards the east-west except the Almudena Cathedral, that is oriented to the north-south because, in its origins, it was designed as part of the Royal Palace complex and its main façade looks towards the south facade of the Palace.

The Virgin of the Almudena

According to the legend, the image of Santa María la Real de la Almudena came to Spain from the hands of Apostle Santiago; San Lucas painted it and Nicodemus carved it. However, one thing seems to be clear: the people of Madrid have always worshiped it.

The current size of the Almudena Virgin is made of gilded and polychrome pine wood. Its origin dates back to the late fifteenth or early sixteenth century. There are other representations of the Virgin; there is one in the crypt, another in the museum, another in the wall of the slope of the Vega and another that attends the processions and presides over the ecclesiastical acts outside the temple.

The Museum of the Almudena Cathedral

To know more about all the corners of this temple you also have the option of visiting the Museum of the Almudena Cathedral. The visit begins in the Chapter Hall and the Main Sacristy, which are decorated with mosaics by the Slovenian priest P. Marko I. Rupnik.

The first exhibition space of this museum is led by the origin and history of this church in Madrid. Afterward, you can see the rooms dedicated to the city patrons: Santa María la Real de la Almudena and San Isidro Labrador. Also, you will see a selection of offerings and donations and the codex of Juan Diacono considered the oldest document of the life of San Isidro.

Finally, the visit ascends to the dome of the Cathedral. Here you can contemplate spectacular views of Madrid from a unique place.

There is a second gallery of the museum where you can find, through the seven Sacraments, the liturgy of the Catholic Church explained.

The museum is open from Monday to Saturday from 10 am to 2.30 pm. The entrance costs 6 euros and there are different reduced rates for students, young people between 10 and 16 years old, seniors and people in a situation of unemployment or with a disability.

Now it’s your turn to discover all the beauty and tradition of the Almudena Cathedral in Madrid. Admire its interior corners and know the stories it tells us. A highly recommended visit to make with the arrival of good weather.

Featured image: View of the Cathedral from the street in Madrid 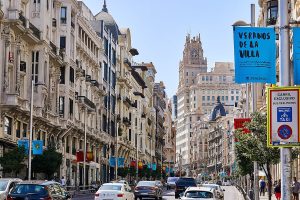 The Gran Vía of Madrid: What You Should Know